April 2019, Q1 Report
A substantial portion of Q1 statistics reflect new listings and accepted offers occurring during the mid-winter market doldrums (Thanksgiving to mid-January). In November and December 2018, the stock market plunged drastically from its all-time high in September, and interest rates hit their highest point in years: These factors negatively affected buyer demand. Then both turned in dramatically positive directions in early 2019. So, Q1 statistics reflect economic conditions in both Q4 2018 (very negative) and Q1 2019 (very positive). It is also the quarter with the lowest sales volume.

The spring selling season - whose data starts to show up in March, but is mostly reflected in Q2 - is the most active of the year. As always, there are many economic factors at play impacting Bay Area markets, some of which are discussed below.

Year-over-Year & Longer Term Trends
Comparing Q1 2019 to Q1 2018 reveals a general softening in the market across most market statistics. 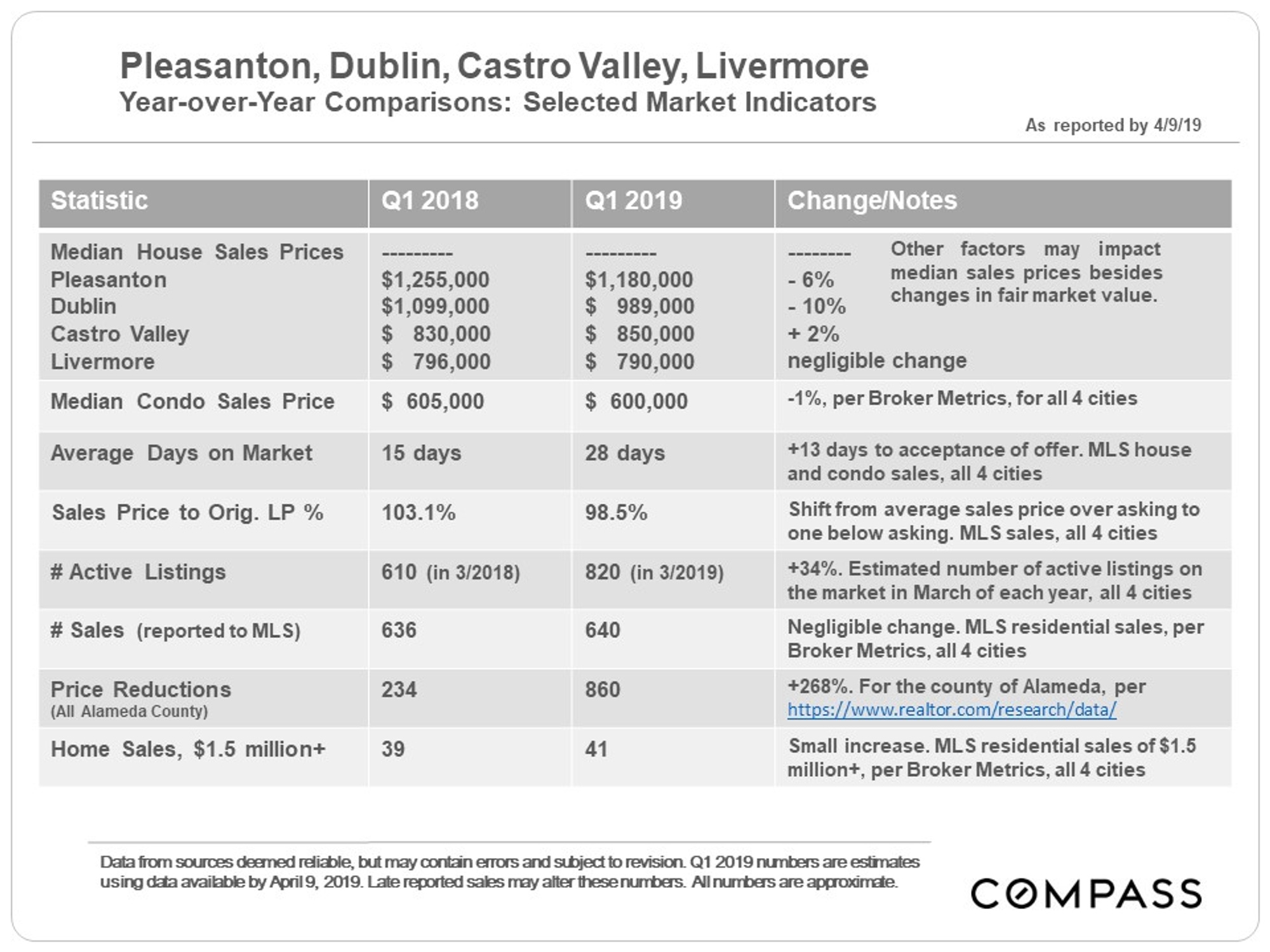 Median Sales Price Trends
Around the Bay Area, generally speaking, the last peak in home prices occurred in spring 2018, a fiercely high-demand market - that spike is clearly illustrated here in this chart for Alameda County. Median sales prices then dropped considerably before starting to increase again in March 2019.
It is not unusual for prices to peak for the calendar year in Q2, the spring selling season, decline afterwards, to then peak anew the following Q2. The question now is: Will we see a new peak in 2019, or was last spring the high-price mark for this phase of the cycle? 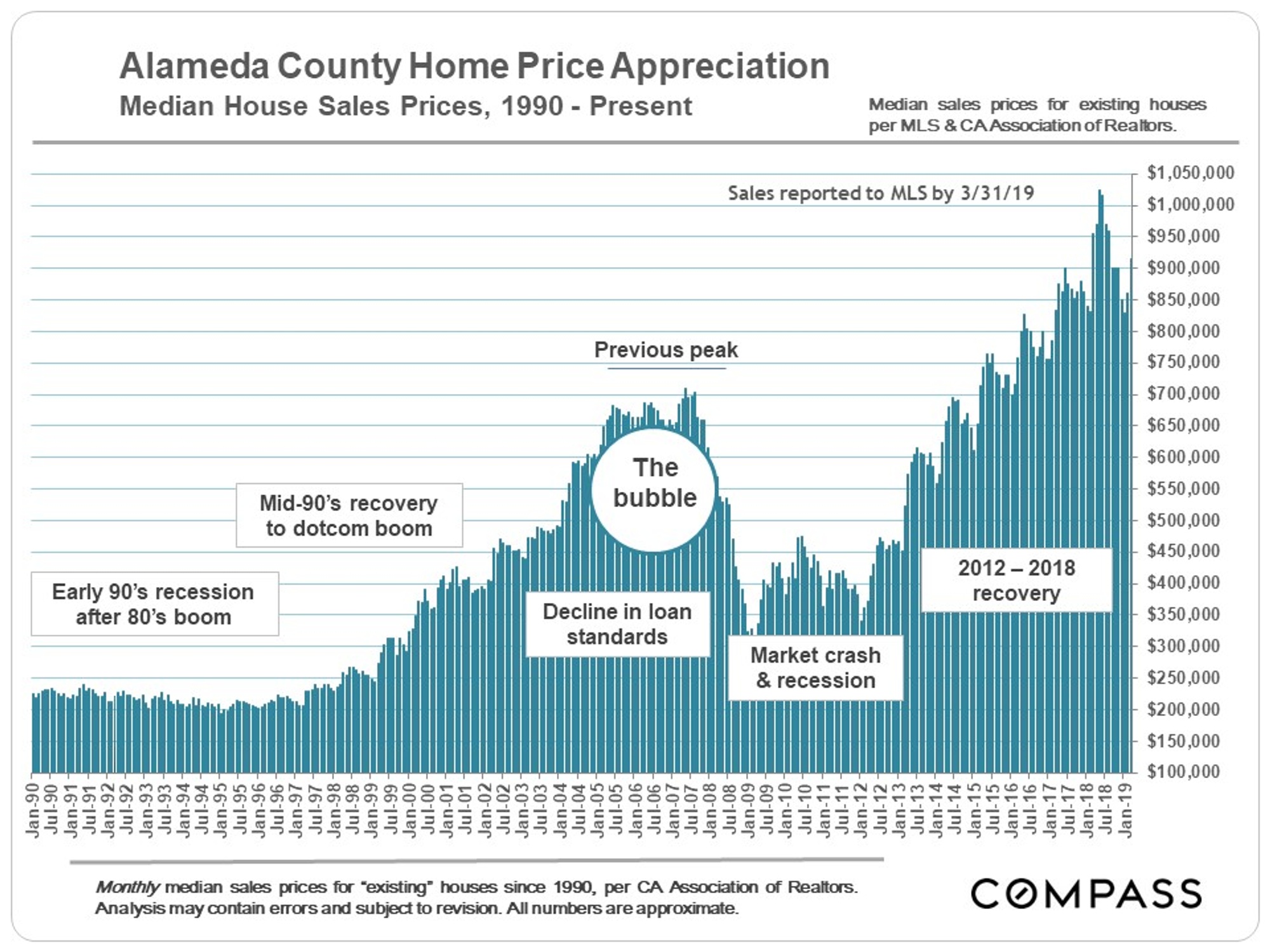 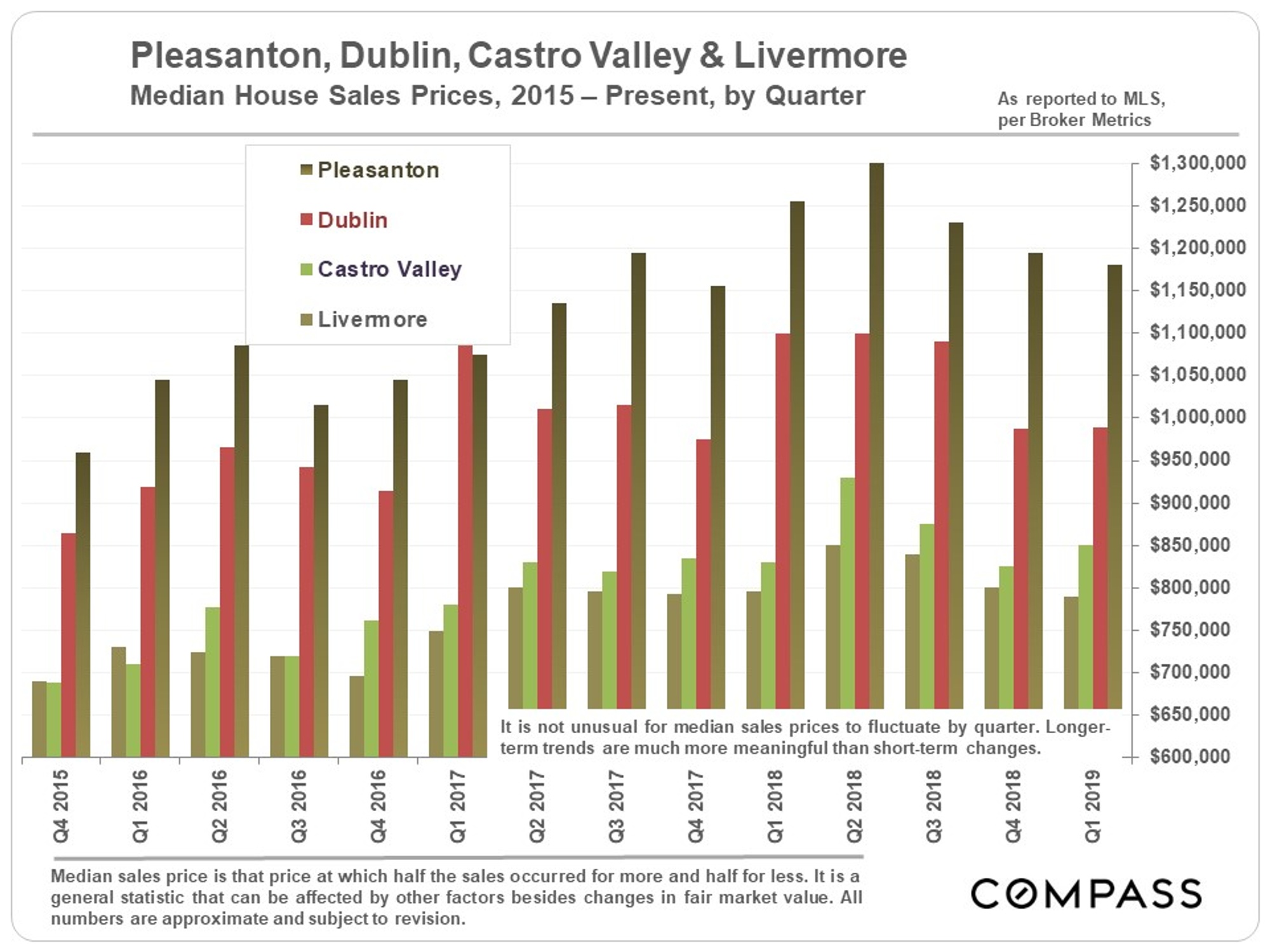 Reviewing year-over-year, quarterly, median sales price changes, using the combined median house price for Pleasanton, Dublin, Livermore and Castro Valley, illustrates the high rates of appreciation climbing through Q4 2017 and Q2 2018, then dropping rapidly to end up very slightly negative in Q1 2019. This was a  common dynamic around the Bay Area, though the magnitude of the upswings and downturns vary in degree. 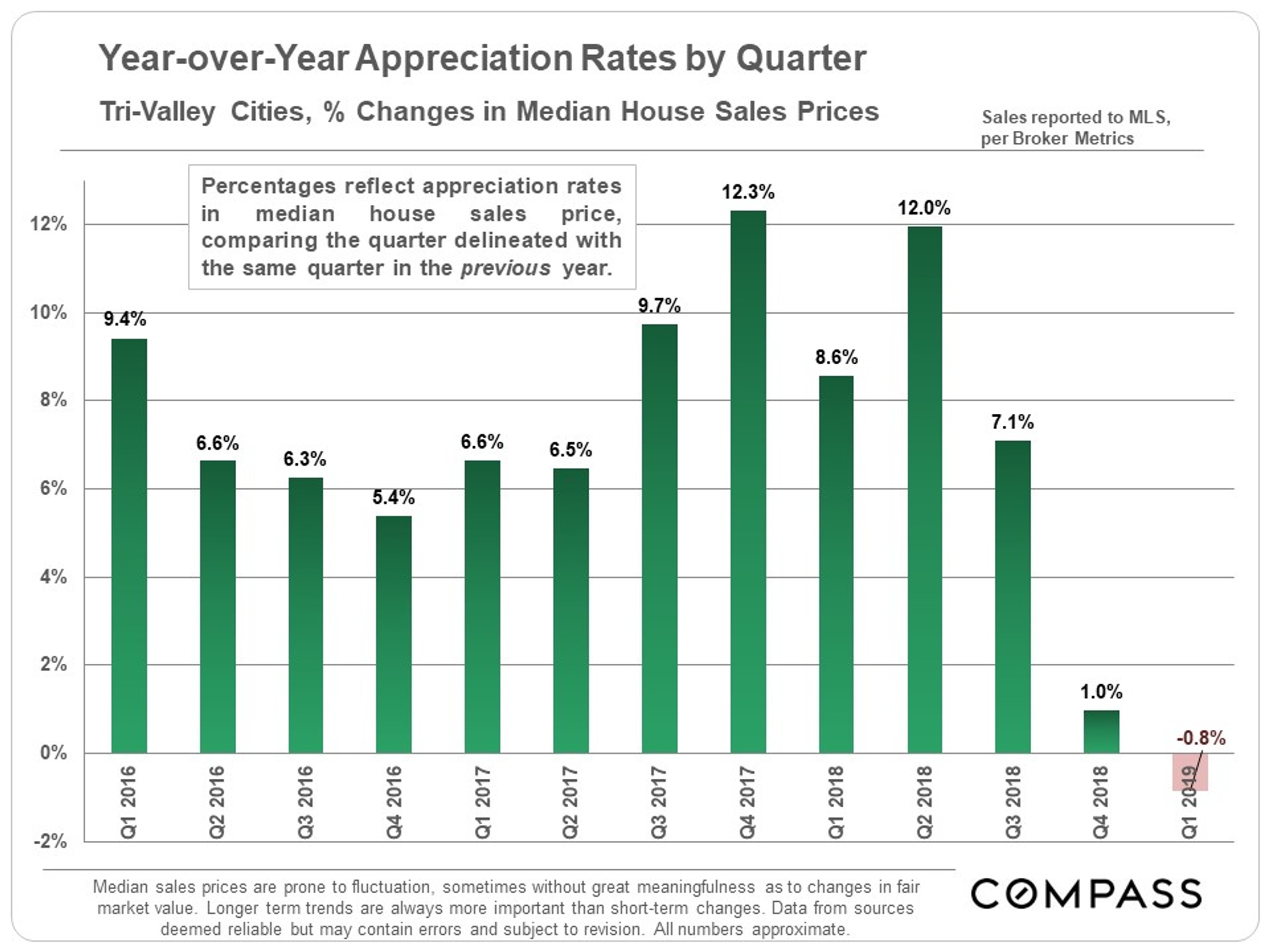 Selected Market Indicators
These longer term trend charts give greater context to the year-over-year changes delineated in the table at the beginning of this report - as well as illustrating the significant impact of seasonality on supply and demand.
Sales price to list price percentages are usually an excellent measurement of buyer demand - when buyers aggressively compete for new listings, it often results in overbidding asking prices. When markets cool, buyers compete less and have more leverage in their negotiations. Spring has typically been the most competitive market of the year. 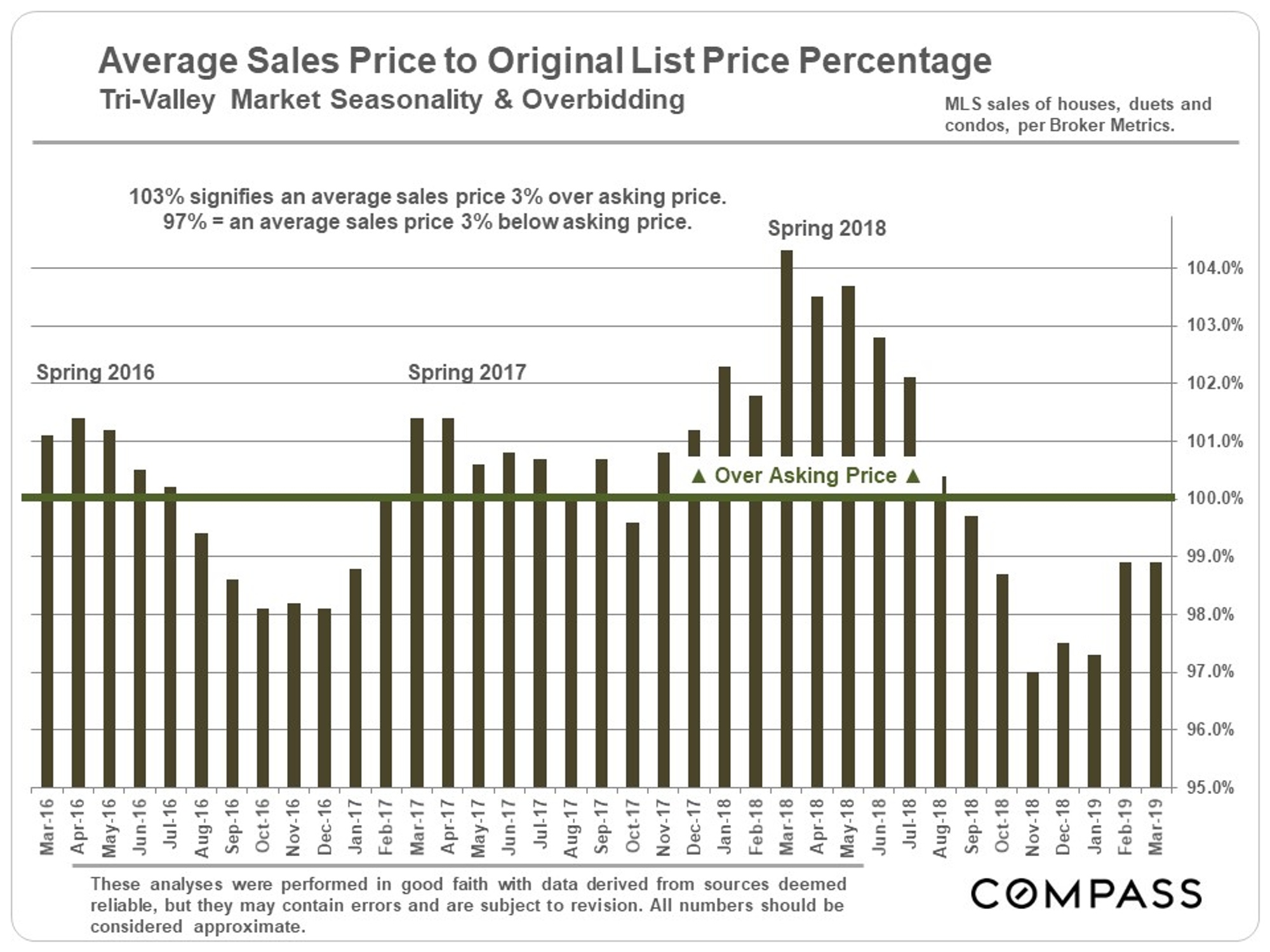 Average days on market are well above those of last year's very competitive market, but not particularly high against historical norms. Readings of 20 days and below are considered extremely low. 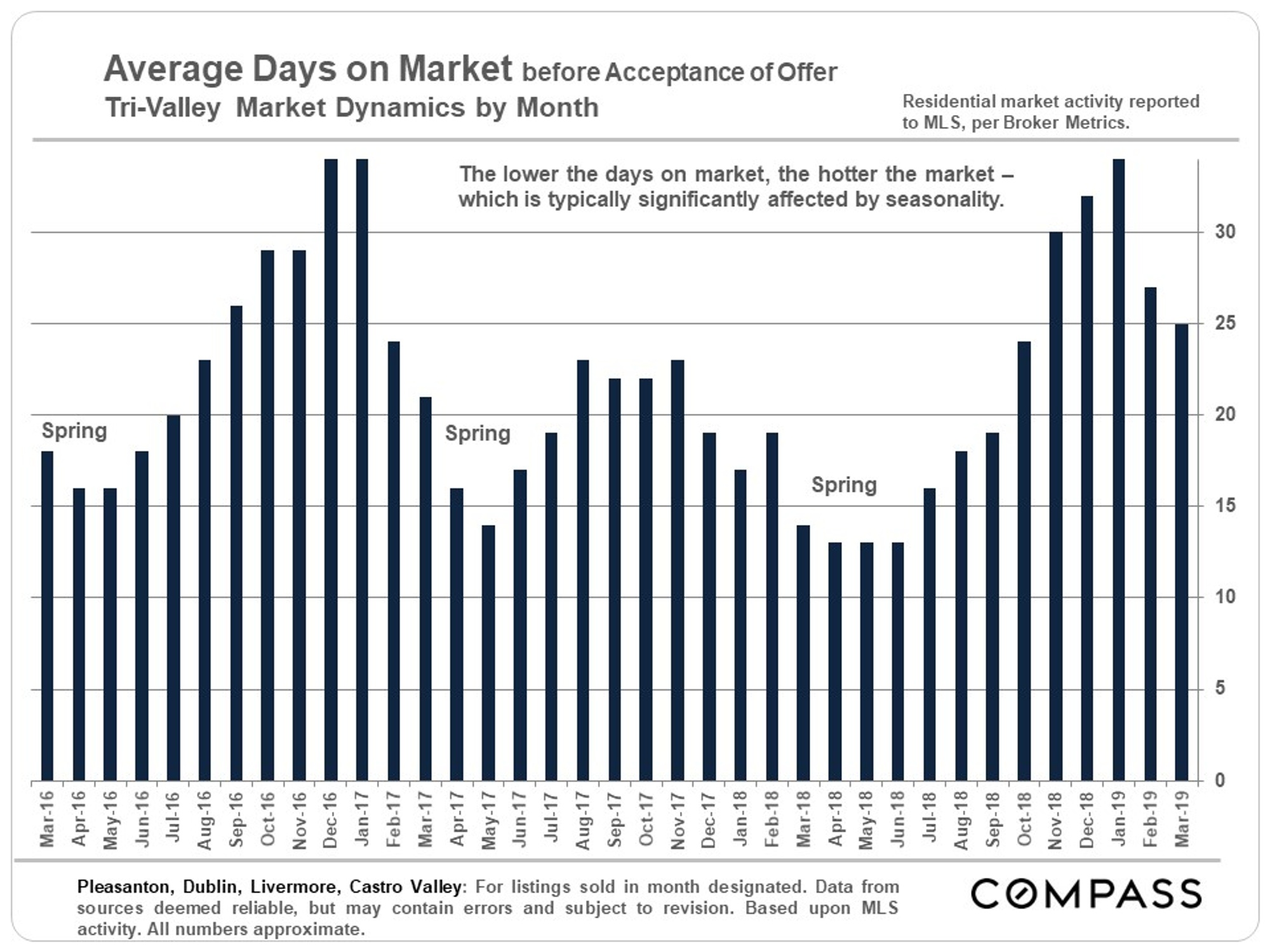 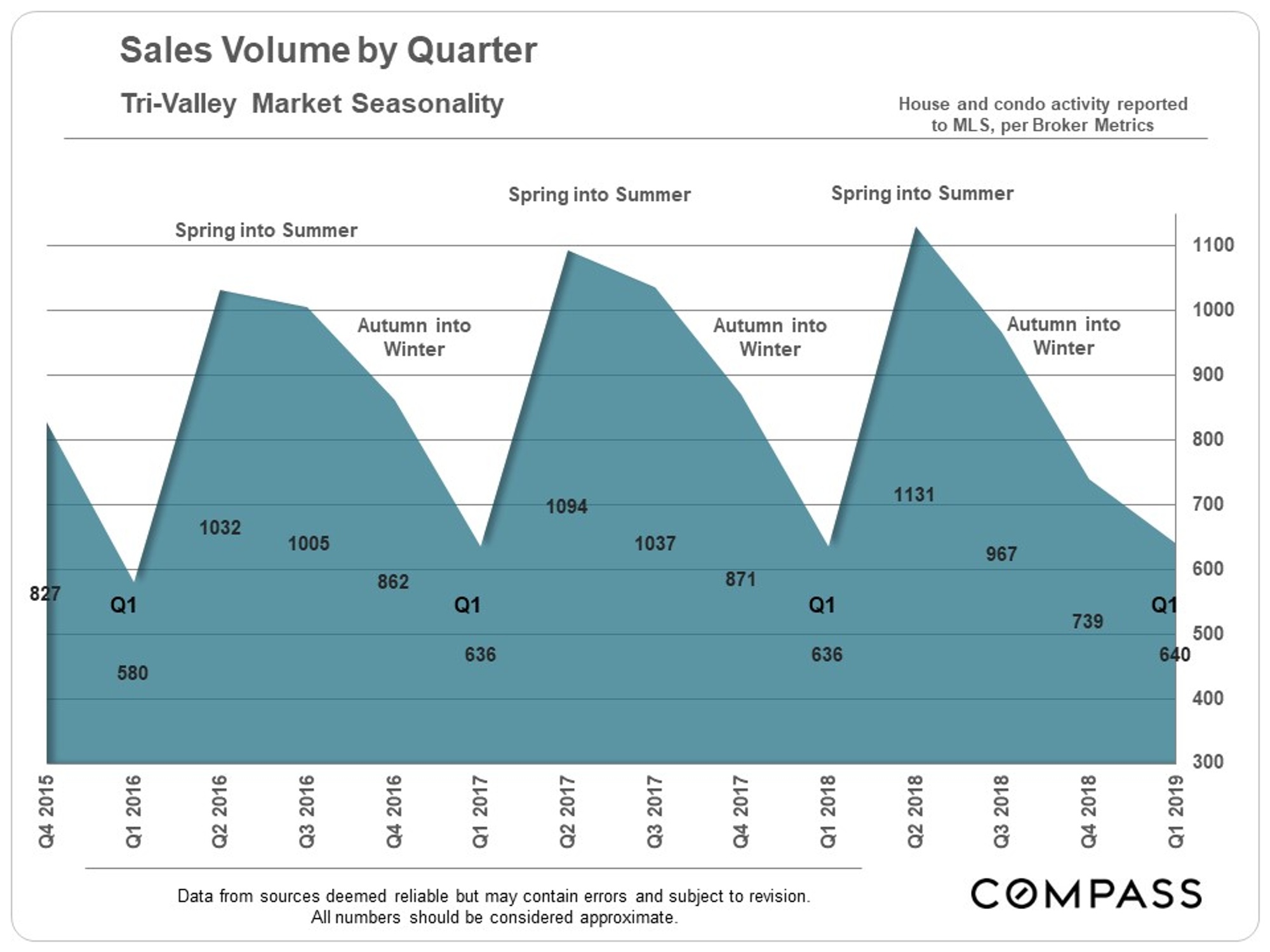 Around the Bay Area, the number of price reductions has jumped since mid-2018. Other counties often saw more dramatic increases than Alameda. 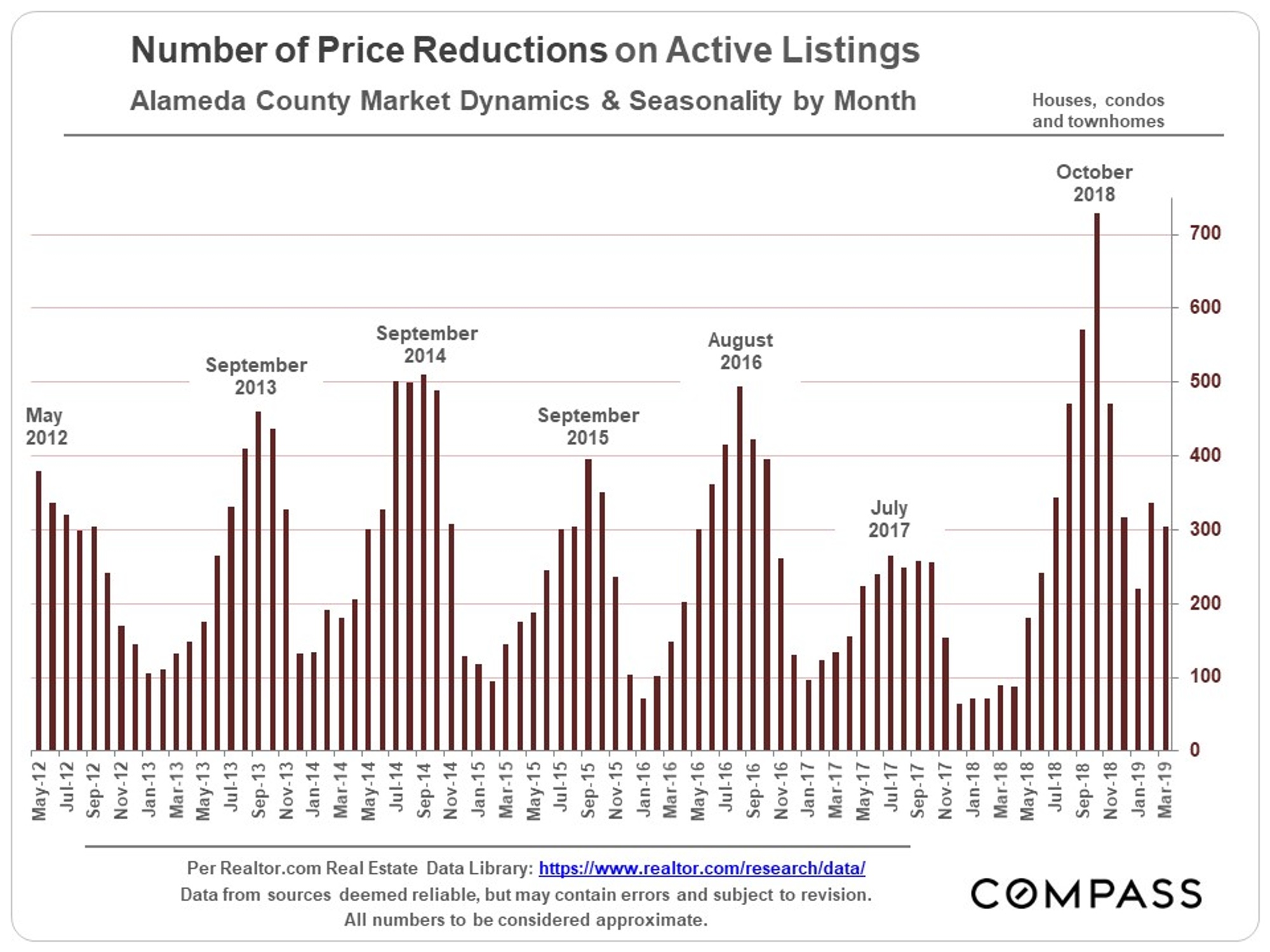 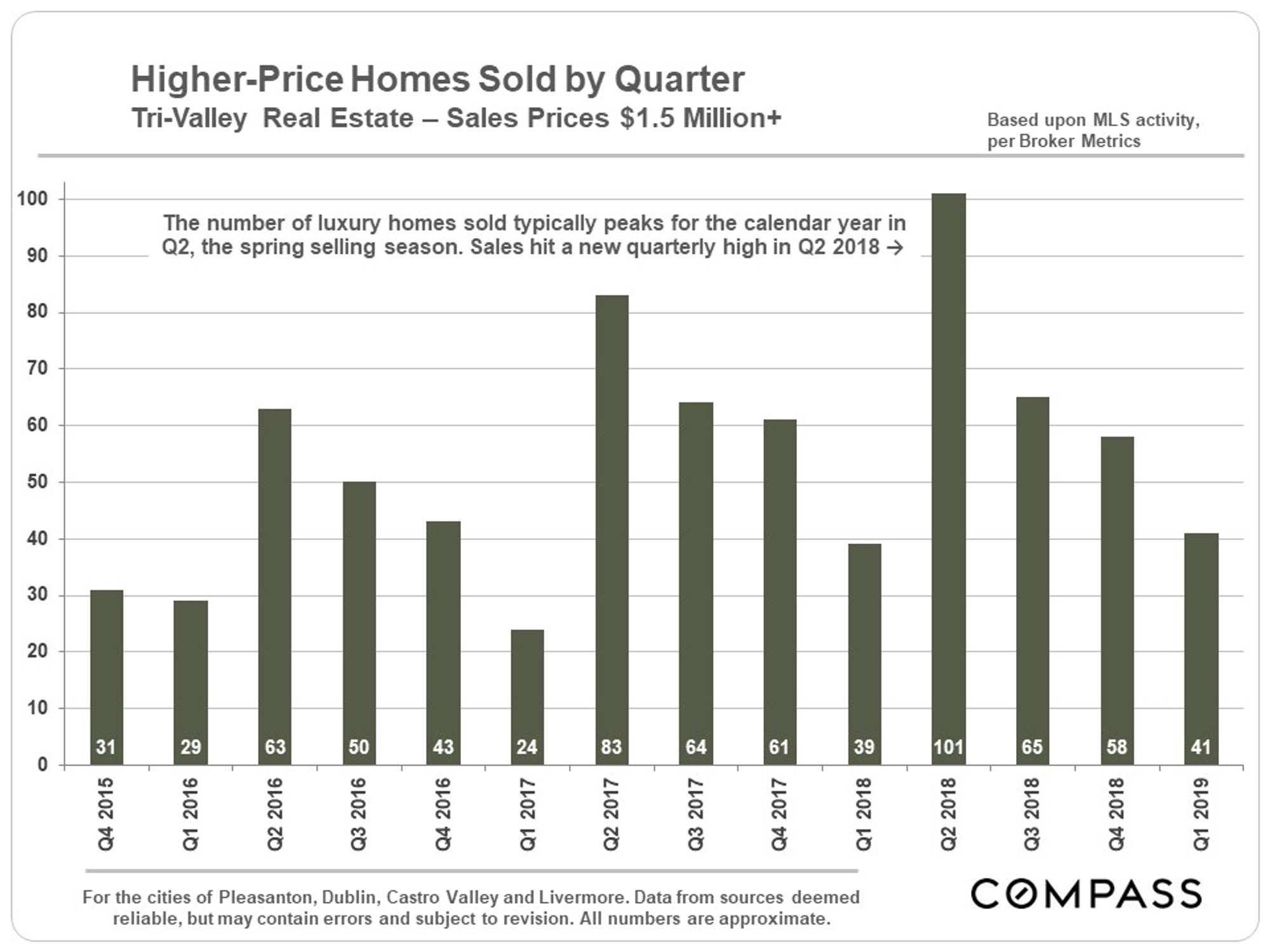 Selected Economic Factors A major factor underlying Bay Area housing markets has been the staggering increase in employed residents since 2010. Outward-bound migration trends of residents and businesses - often citing housing costs as one major motivator - have been an increasing concern in recent years, but for the time being, employment numbers have continued to grow. 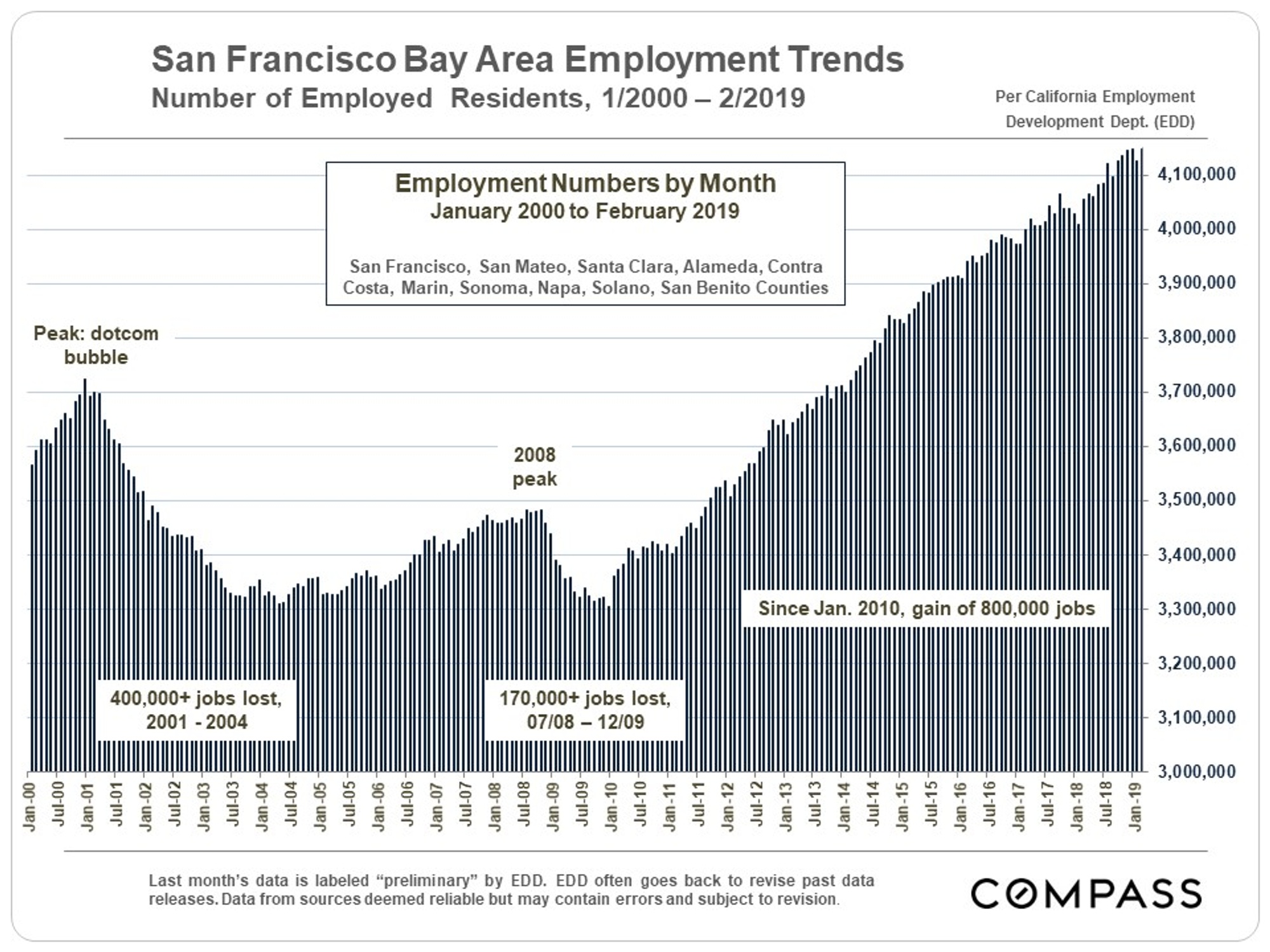 A wild ride in stock prices, particularly in high-tech: Prices soared to new peaks in summer-early autumn 2018, plunged drastically in Q4 2018, and then saw the biggest Q1 jump in 20 years. Huge amounts of wealth appearing, disappearing and reappearing - another major influence on consumer confidence and home-buyer demand.

A new surge of large, high-tech unicorn IPOs - mostly of firms headquartered in SF - has just started to roll out. IPOs have historically created vast quantities of new wealth in the Bay Area, though the magnitude of effect of this new wave on our local housing market, if any, is yet unknown. 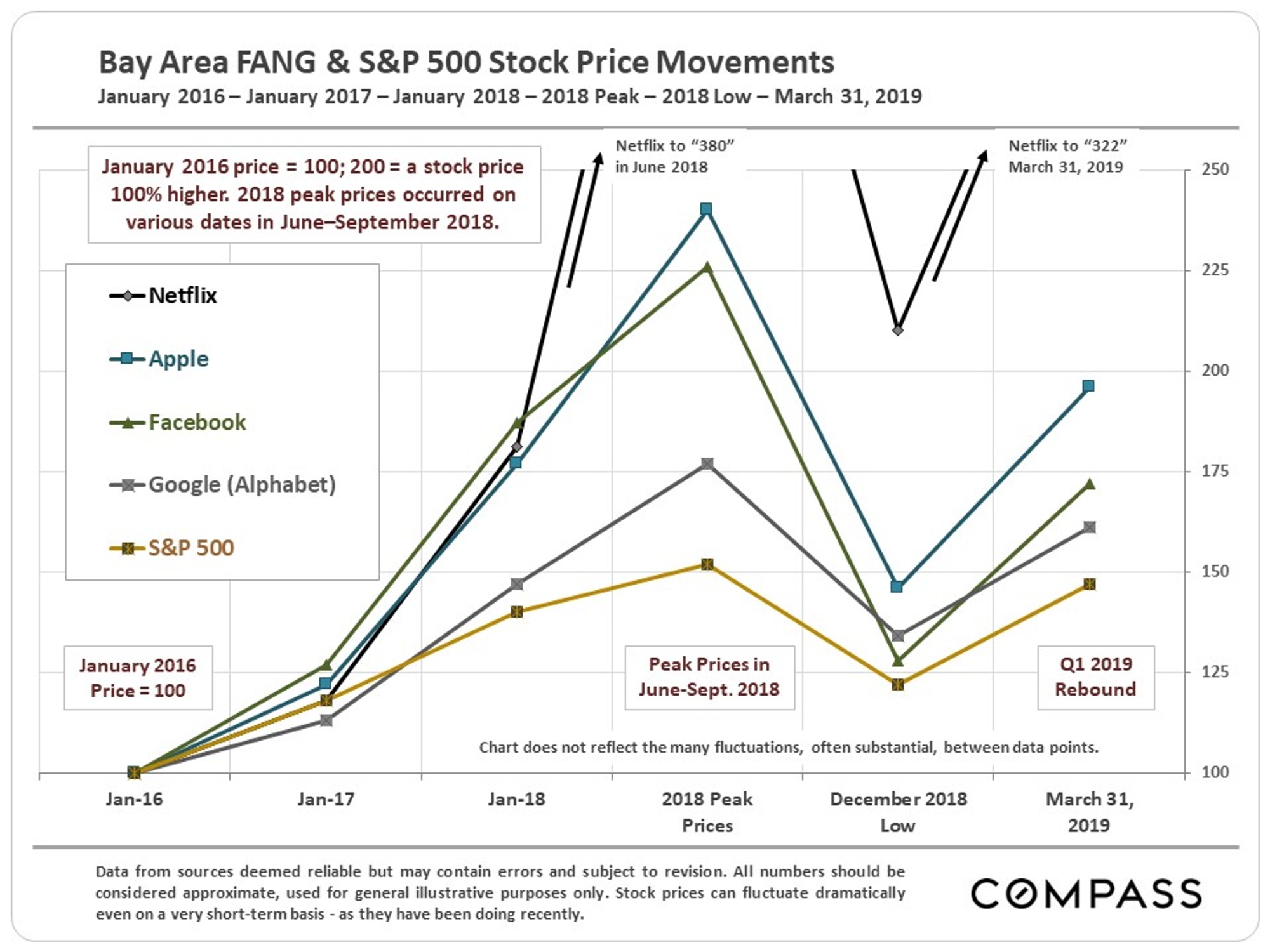 There has been a stunning decline in mortgage interest rates from mid-November 2018 through the end of March, from 4.94% to 4.06% - to the enormous advantage to buyers. Big drops such as this have helped to recharge buyer demand in the past. 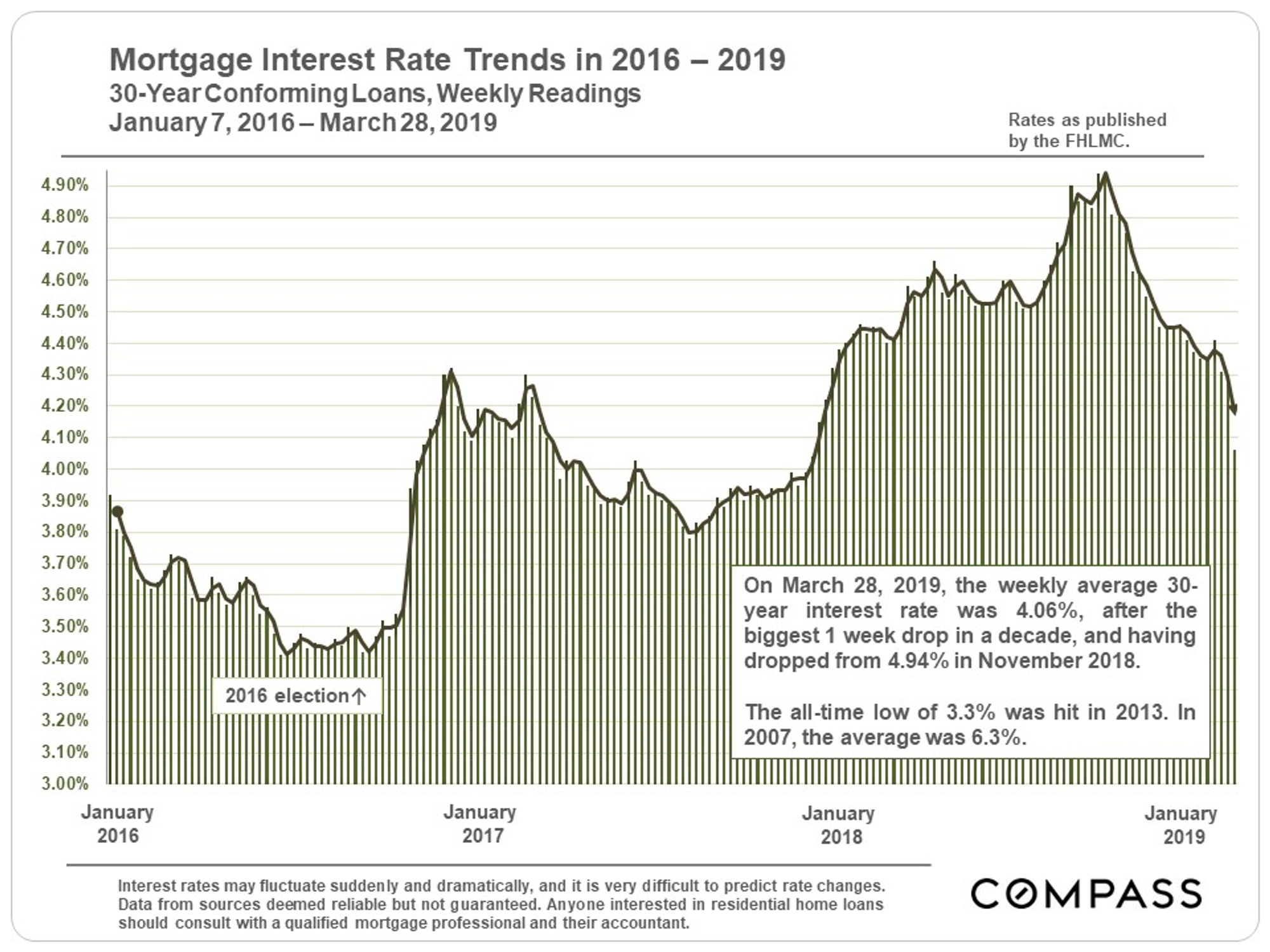 Housing Affordability & Household Incomes
This chart calculates the income required to buy a median-price house in Q4 2018. For the 4 cities of Pleasanton, Dublin, Livermore and Castro Valley, the overall median house price has been running about 5% above that of Alameda County as a whole. 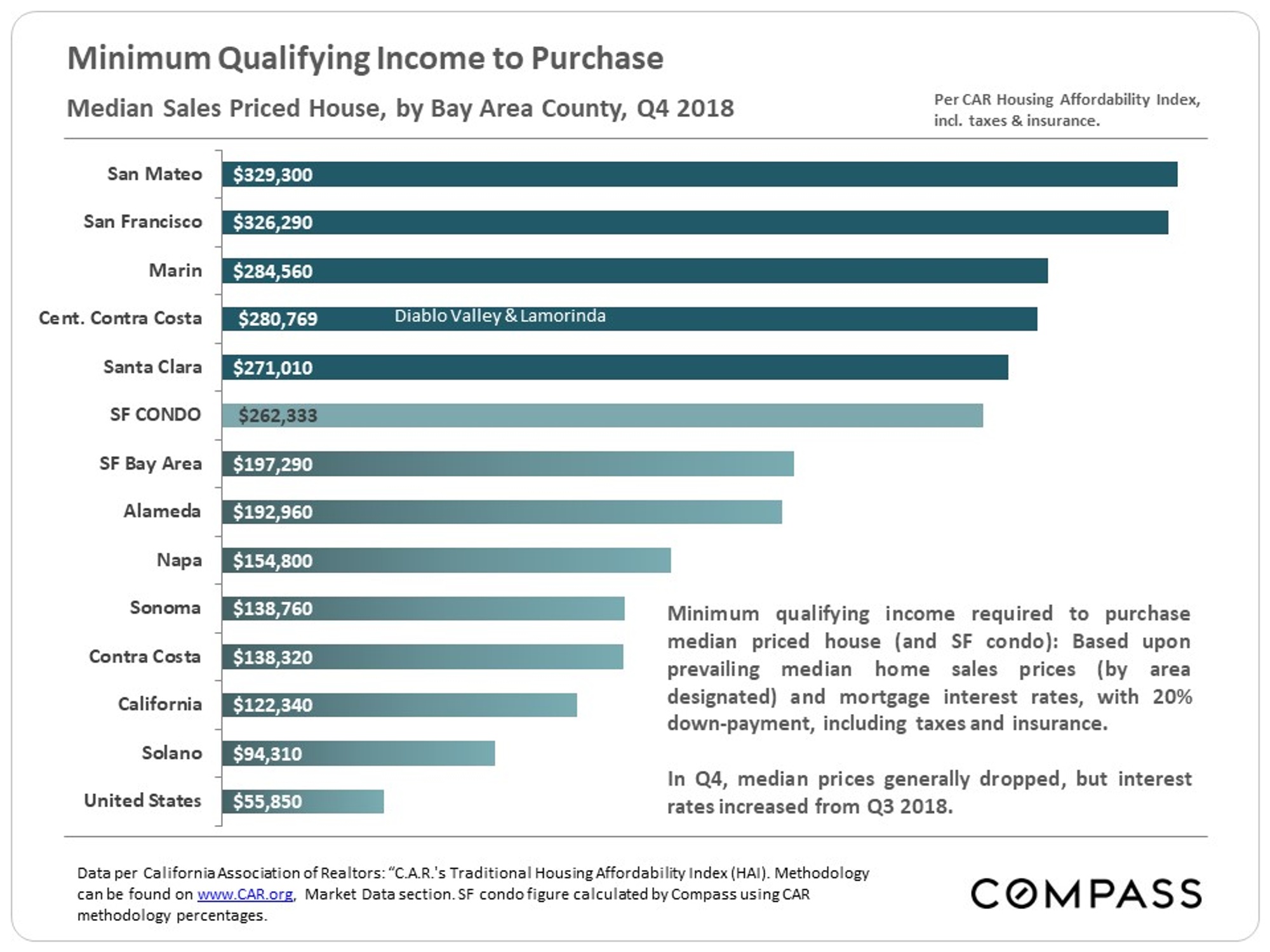 County median household incomes are broken out below for homeowners and tenants. Comparing the chart below to the one above illustrates the disparity between prevailing incomes and the incomes required to purchase in the Bay Area. 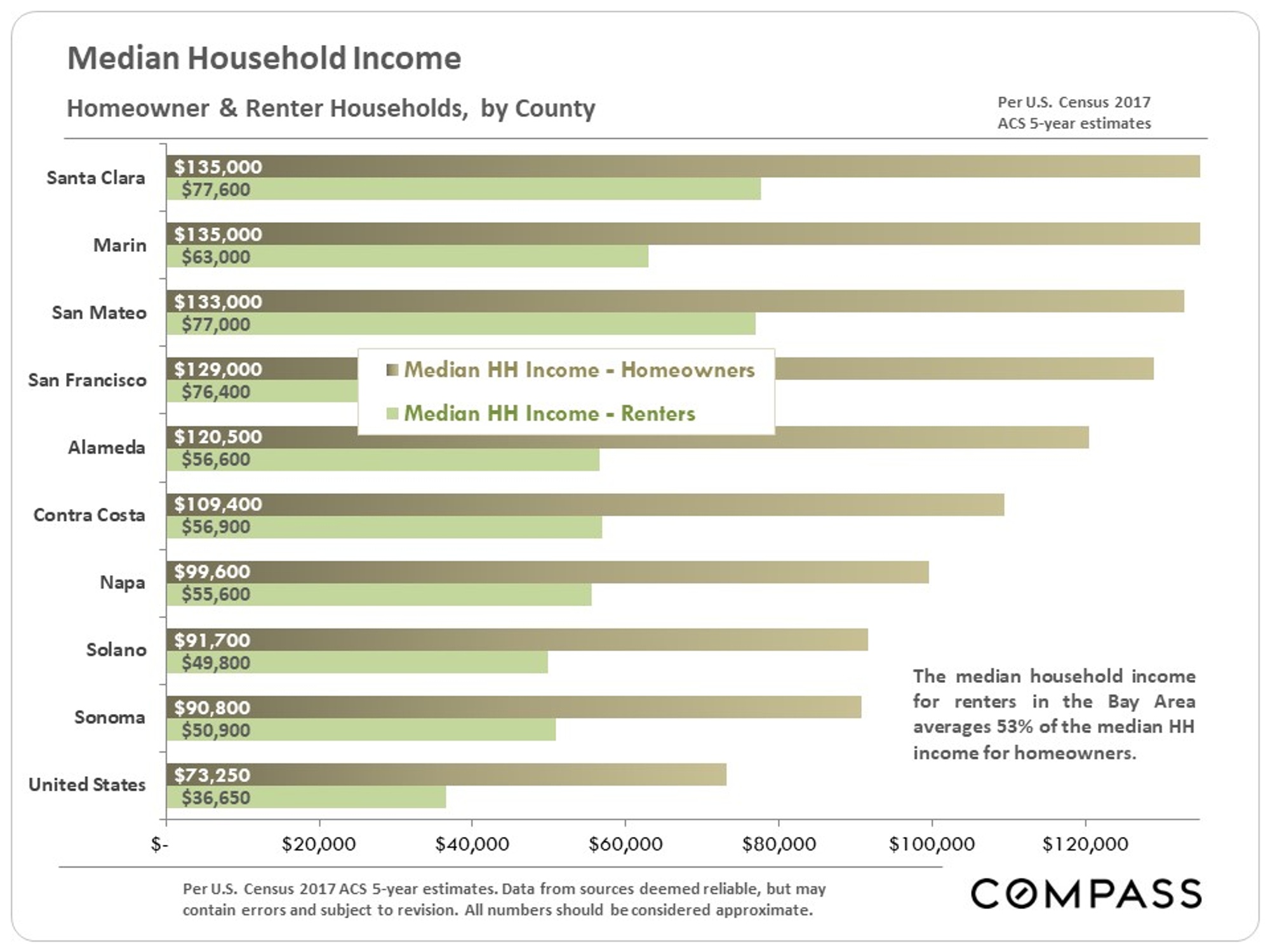 Health & Economic Indicators
According to CountyHealthRankings.org, Bay Area counties are at the top of the list within CA for Overall Health Outcomes: Marin, San Mateo and Santa Clara rank 1, 2 & 3, while Alameda County ranks 12th. However, if the Tri-Valley region were evaluated separately, its health factor rankings would certainly be much higher. 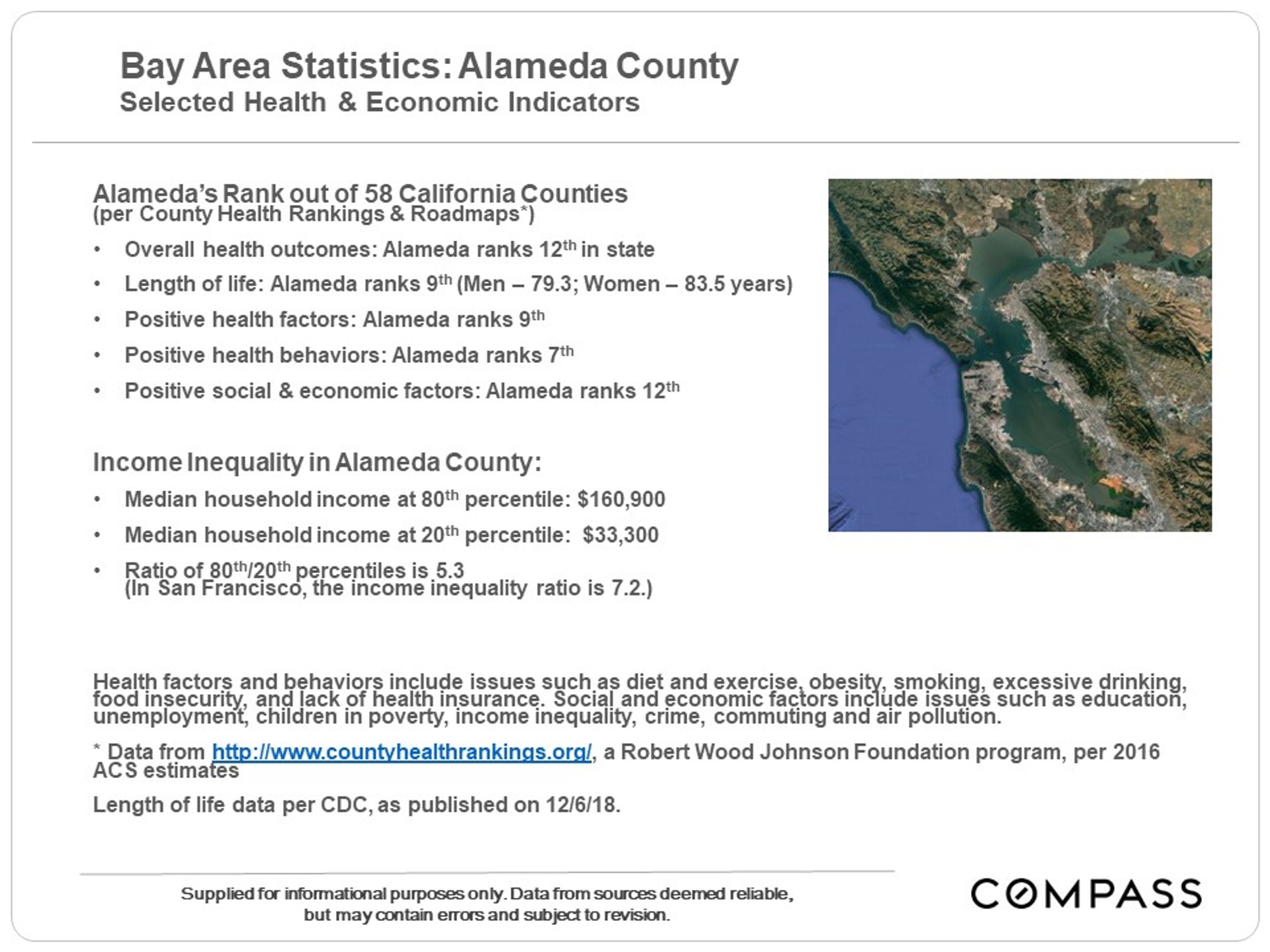 Prema understands what it is like to stand in her client’s shoes. Buying and selling houses of her own, has afforded Prema a sensitivity towards her client’s journey. Meeting new people and helping clients find the right house to call home is her passion.
Connect With Me